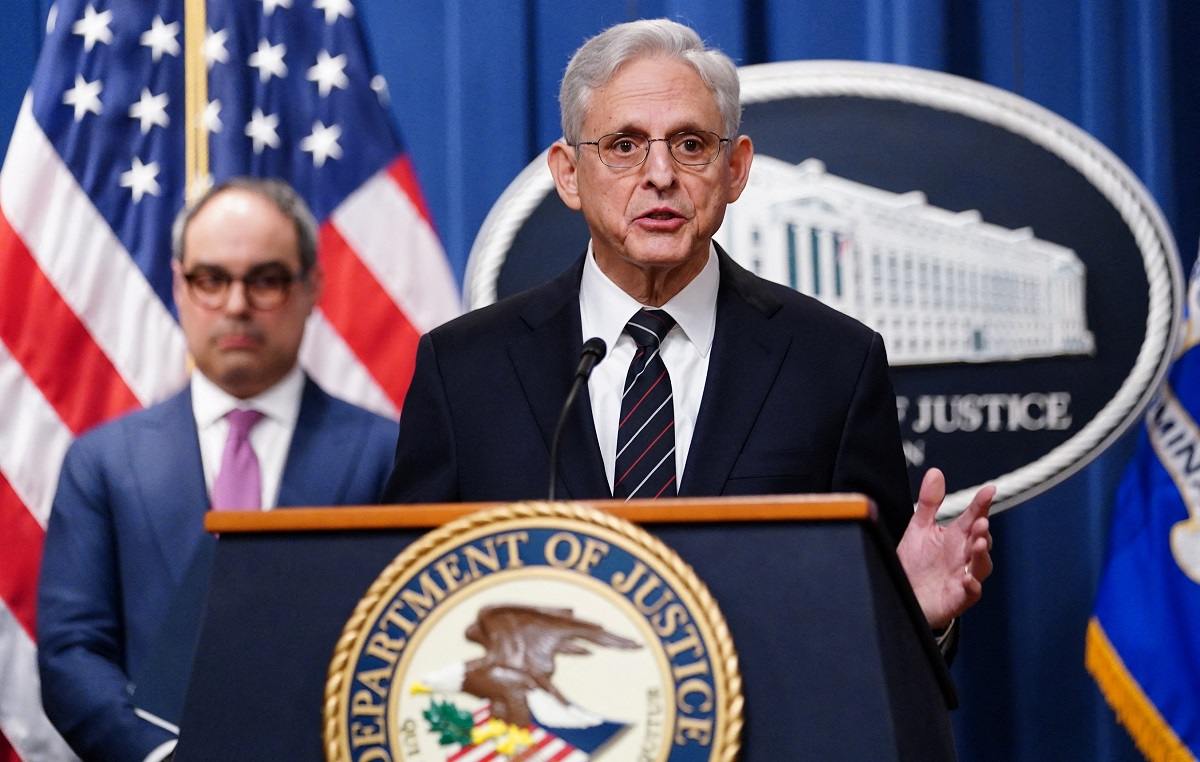 9 days ago The Japan News

“We are taking action by filing this lawsuit to unwind Google’s monopoly and restore competition to the digital advertising business,” he said in a statement. The government asked for the divestiture of the Google Ad Manager suite, including Google’s ad exchange, AdX. The lawsuit raises concerns about certain products in the ad tech stack, where publishers and advertisers use Google’s tools to buy and sell ad space on other websites. An ad tech divestiture “may not be a game changer but it could be sneaky important to Google’s ad targeting capability,” said Paul Gallant with the Cowen Washington Research Group. I think Google might be more concerned about losing ad tech down the road than people might think,” Gallant said.
Continue reading...

Read On "The Japan News"

More News On "The Japan News"

AP Photo/Markus SchreiberPeople set up the stage at the eve of the opening of the World Economic Forum in Davos, Switzerland, Sunday, Jan. 15, 2023. Experts say what was once a conspiracy theory found in the internet’s underbelly has now hit the mainstream. “This isn’t a conspiracy that is playing out on the extreme fringes,” said Alex Friedfeld, a researcher with the Anti-Defamation League who studies anti-government extremism. Participants discussed “The Great Reset,” among a host of other theories, as an assault on America’s foundations. The concern, Friedfeld says, is that posts like these could introduce people to more fringe and dangerous conspiracy theories or even translate into real-world violence.

17 days ago The Japan News

It can be said that the management of U.S. information technology companies, which have been growing rapidly through online shopping, social media and other services, has reached a major turning point. Among U.S. tech companies, Facebook parent Meta announced in November that it would lay off more than 11,000 employees. In the July-September 2022 quarterly financial results, four of the five major U.S. tech companies — Meta, Amazon, Google parent Alphabet and Microsoft — posted declines in net profit. In the tech sector, a stern eye has been cast on companies’ handling of data and personal information. Major job cuts by U.S. tech companies may at the same time provide an opportunity for talented engineers and other personnel to work brilliantly for other companies.

22 days ago The Japan News

A Japan-U.S. Security Consultative Committee meeting of foreign and defense chiefs, also known as the 2-plus-2 security talks, was held in Washington. Defense Minister Yasukazu Hamada explained Japan’s policy of strengthening its defense capabilities by substantially increasing the defense budget. Japan and the United States should consult closely with each other to enhance the deterrent effect. Therefore, it is significant for Japan and the United States to establish a defensive posture for space based on the security treaty. Expanding the framework of security cooperation beyond the alliance with the United States to European nations will lead to peace and stability in the Indo-Pacific region.

21 days ago The Japan News

At Davos, Zelenskyy urges allies to speed up push vs. Russia

AP Photo/Markus SchreiberPresident Volodymyr Zelenskyy of Ukraine talks from a video screen to participants at the World Economic Forum in Davos, Switzerland on Wednesday, Jan. 18, 2023. NATO Secretary-General Jens Stoltenberg said Ukraine’s Western backers this week will discuss ways to supply heavier and more advanced weapons. Environmentalists, for example, slam the carbon-spewing private jets that ferry in bigwigs to an event that prioritizes the battle against climate change. Zelenskyy has daily pleaded for more advanced weapons, escalating his requests as Russia introduces new tactics and weapons against the much smaller Ukrainian army. Guterres was not optimistic that the conflict being waged less than 1,000 kilometers (620 miles) from Davos would end soon.

15 days ago The Japan News

India is striving to boost its hydropower production to help meet a target for overall clean energy capacity of 500 gigawatts (GW) by 2030. “Ninety percent of this problem is because of hydropower projects. “India needs to do a rethink and hydropower projects in the Himalayan region should be stopped,” said Prakash, who is also an author of the Intergovernmental Panel on Climate Change reports in 2019 and 2022. Works haltedExperts have warned for years that large-scale construction work, including hydropower projects, in and around Joshimath could lead to land subsidence — the sinking or settling of the ground surface. Shiv Lal’s nephew got a plumbing job at the hydropower plant, but it was a short-lived role, he said.

13 days ago The Japan News

Experts Divided on Lowering of COVID-19 Classification in Japan

Courtesy of National Institute of Infectious DiseasesThe omicron variant of the novel coronavirus is seen in an electron micrograph. Japan appears to be still far from achieving herd immunity, with the daily number of new COVID-19 deaths remaining high, while the fatality rate among COVID-19 patients is declining. “We cannot deny the possibility of another subvariant emerging, so shifting to Category V this spring would be hasty and dangerous,” Sugaya stressed. Urashima said the government should lower the classification to Category V soon, in order to allow patients to be treated at ordinary hospitals. Meanwhile, an expert panel of the health ministry said last week that lowering the COVID-19 classification is likely to have little impact as COVID-19 activity restrictions have already been lifted significantly in Japan.

12 days ago The Japan News

AP Photo/Jess RapfogelWashington Wizards forward Rui Hachimura (8) smiles after scoring against the Orlando Magic during the second half of an NBA basketball game, Jan. 21, 2023, in Washington. The Los Angeles Lakers acquired former lottery pick Rui Hachimura from the Washington Wizards on Monday in exchange for Kendrick Nunn and a package of second-round draft picks. Hachimura has appeared in 30 games for the Wizards this season, all off the bench, averaging 13.0 points on 49% shooting. Hachimura equaled a career high with 30 points for the Wizards on Saturday in his final game before the deal. If he continues to improve, Davis could return during the Lakers’ upcoming five-game road trip, which begins Saturday in Boston.

10 days ago The Japan News

26 minutes ago - J&K Govt sanctions Rs 62 cr project for Commercial Cultivation, Conservation of UTs' Herbal Riches 28 minutes ago - Man pleads guilty to treason offence, threatening to kill Queen Elizabeth 29 minutes ago - BRITs host Mo Gilligan 'sees where Sam Smith is coming from' as female artists snubbed 30 minutes ago - Aaron Rodgers quizzed on NFL future and cracks San Francisco 49ers joke 31 minutes ago - Archie Battersbee was bullied and sent WhatsApp messages telling him to kill himself, mother reveals 32 minutes ago - BBC dismisses complaint on Scottish indyref2 debate 'with no SNP' 33 minutes ago - KCDK-E announces action plan for 15 February 36 minutes ago - Glam rock icon to vile child sex attacker as he leaves jail 36 minutes ago - United Rugby Championship: Stormers’ big guns return for coastal derby with Sharks 40 minutes ago - Our weekend arts and culture picks, from Knock at the Cabin to 2:22 A Ghost Story 52 minutes ago - Ireland To Dominate From Start To Finish 52 minutes ago - Boris Johnson talks cows, quadbikes and kids in Talk TV interview with Nadine Dorries 54 minutes ago - Movie reviews: 'Knock at the Cabin' wastes an interesting cast and premise with a hollow story 54 minutes ago - Kate Winslet's lookalike daughter Mia Threapleton, 22, looks chic at BAFTA bash 55 minutes ago - Invest in downtown Alpena expansion 56 minutes ago - How air pollution can checkmate chess players 59 minutes ago - Happy Valley’s 11 big unanswered questions before Sunday’s finale 1 hour ago - Stock market news live updates: Stock futures fall ahead of jobs report, after Big Tech results disappoint 1 hour ago - ‘Stonehenge of the North’ opens to the public 1 hour ago - Global Aviation Connectors Market to Reach $6.6 Billion by 2030 1 hour ago - Speech by Economic Secretary, Andrew Griffith MP, at The City UK’s Annual Dinner 1 hour ago - BP Investors Hope for Shell-Level Profit Increases 1 hour ago - Six Nations: Talking points ahead of Ireland's opener with Wales in Cardiff 1 hour ago - Graham Coughlan: Newport County face ferocious League Two spell 1 hour ago - Seth Rogen credits wife for his new lifestyle brand: she ‘held my hand throughout’ 1 hour ago - What is the life expectancy of a lupus patient? Selena Gomez addresses shaky hands in new video 1 hour ago - Man caught with crossbow pleads guilty to trying to harm Queen Elizabeth 1 hour ago - Matty Healy urges Oasis to 'grow up', stop fighting and do Glastonbury 1 hour ago - Gareth Bale shines at first PGA event including incredible cart shot in round of 65 1 hour ago - Global Forecast-Fahrenheit 1 hour ago - Laurel Park picks and ponderings: February 3, 2023 * The Racing Biz 1 hour ago - Marcus Rashford is Premier League Player of the Month for January as Mikel Arteta wins manager gong 1 hour ago - OnlyFans model bombarded by 'unsolicited nudes' after just six months on the site 1 hour ago - Grammy predictions: AP writers debate who’ll win on Sunday 1 hour ago - 30-year-old dog earns Guinness World Record for being the oldest dog ever! 1 hour ago - "Wetin do stadium?" Beyoncé announces Renaissance world Tour with no African country in sight, Nigerians react 1 hour ago - Talking points ahead of England’s Calcutta Cup clash with Scotland 1 hour ago - Crossbow intruder caught at Windsor Castle admits trying to harm queen 1 hour ago - Inside one of 'Britain's grimmest suburbs' where fly-tippers 1 hour ago - Beyonce Renaissance tour: More than 400,000 in queue for pre-sale tickets 1 hour ago - Red Wave Investments LLC Has $438,000 Stake in Alphabet Inc. (NASDAQ:GOOG) 1 hour ago - Italy v France, Six Nations 2023: Kick-off time, TV channel and team news 1 hour ago - The Book Banners’ Recruitment Agenda: Book Censorship News, February 3, 2023 1 hour ago - Fantasy Premier League: Four of the best captains for GW22 1 hour ago - Ranking the Dallas Cowboys’ Last 7 Divisional-Round Losses From Least to Most Embarrassing 1 hour ago - Apple doesn’t need a new HomePod, it needs a smart assistant 1 hour ago - Crossbow-wielding intruder admits trying to harm the Queen 1 hour ago - Italy vs France, Six Nations 2023: Kick-off time, TV channel, where to watch, team news, lineups, odds 1 hour ago - ‘We will be back’, vows London’s Vagina Museum 1 hour ago - Graham Potter starts three newcomers, one is a record signing 1 hour ago - Emily Atack reunites with Inbetweeners co-star as they mull over 'sequel no one wanted' 1 hour ago - Wales v Ireland exact scoreline predicted as rugby writers agree what will happen 1 hour ago - Paddy Power Pick 5: Free chance to win £50,000 by finding winners from Dublin Racing Festival, Sandown & Musselburgh 1 hour ago - Confirmed runners and riders for day two of the Dublin Racing Festival 1 hour ago - All You Need to Know About Vitalik Buterin: The King of Ethereum 1 hour ago - Apple doesn’t need a new HomePod, it needs an assistant that’s actually smart 1 hour ago - Henry McLeish: The independence wars of the SNP and the culture wars of the Tories are holding Scotland back 1 hour ago - XRP Price Prediction as $1 Billion Trading Volume Comes In – Are Whales Buying? 1 hour ago - Six Nations team guide: Wales 1 hour ago - 5 Fortnite skins that were a victim of real-life controversies