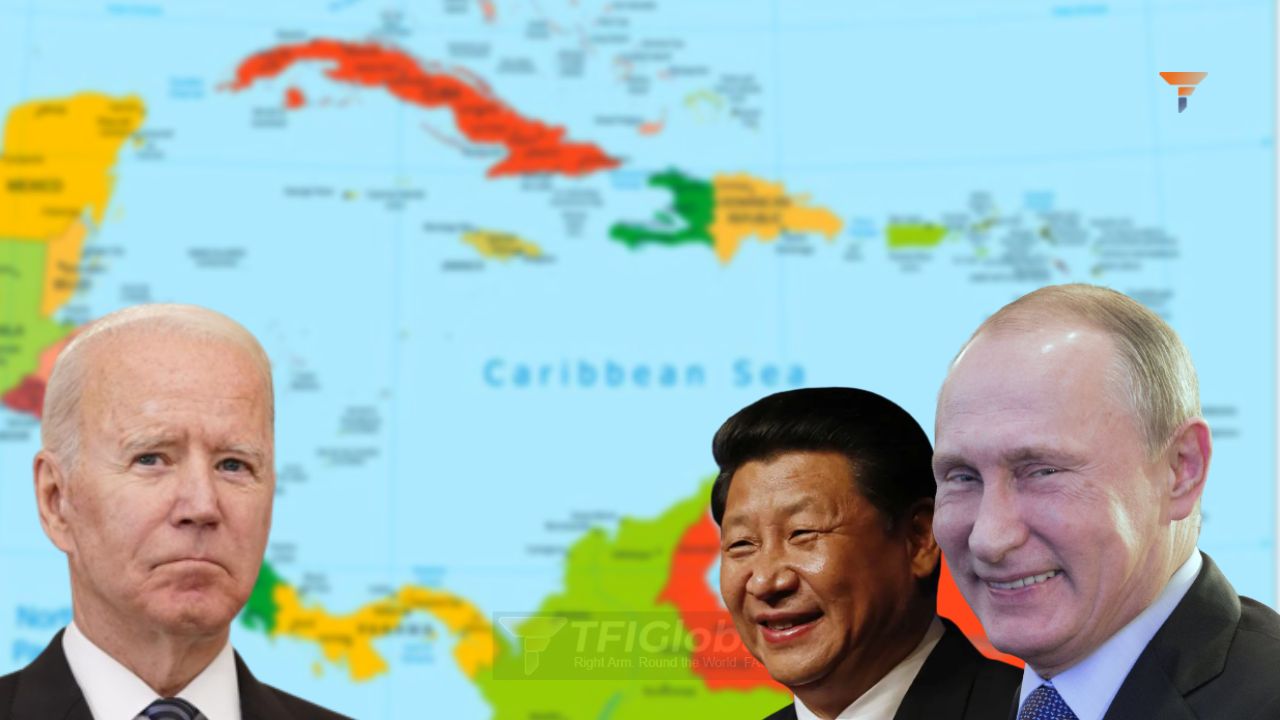 China and Russia to the rescueFollowing the failed attempt of the US to influence the political affairs of Venezuela, Maduro is now reaching out to its allies Russia and China. In fact, the Venezuelan president has proposed the creation of a new international organisation comprising the Latin American and Caribbean nations which will have close relations with Moscow and Beijing. Calling Putin and Jinping as his elder brothers, Maduro emphasised on the unity of the South American and Caribbean countries. Venezuela’s criticism of the unipolar geopolitical order, which is dominated by the US, has been echoed by Russia and China. the Caribbean nations.
Continue reading...

395 Haitian migrants were stopped earlier this week by local coast guards from the USA in the waters off the Bahamas. Just a few days ago, we reported that migrants in the Bahamas have the authority to crumble the state of the Bahamas entirely. Now, the Bahamas is introducing a US-style title 42 policy to deport migrants. For three years, America’s Title 42 has allowed the U.S. to expel hundreds of thousands of migrants on public health grounds. The majority of migrants dealt with under Title 42 have been sent back to Mexico via land, and this procedure can be completed in a matter of hours.

Angola’s first satellite control centerAngolan President João Lourenço recently inaugurated the country’s first satellite control center. The main task of the satellite control center is to monitor the activity of the satellite “ANGOSAT 2” which was launched in October, last year with the help of Russia. Angola’s space journey with Russian thrustAngola launched its first telecom satellite, the Angosat-1, in 2017, which was built following an agreement between Angola and Russia in 2009. In addition, Angola joined the league of African countries that have intensified their efforts to develop their respective space programs. Nevertheless, Angola’s space program today is a result of its perseverance, and the country has added another feather to its cap as Africa marches ahead with its space ambitions.

Workers might be more willing to make concessions if unemployment and interest rates continue to rise. What is more alarming, is the parallel population and housing crisis that is going to be a challenge for the government when it aims to bring in more immigrants. Canada is experiencing a housing crisis due to an imbalance between the number of people required to construct those homes and the increasing number of homes that are required. In the meantime, due to rising interest rates, nearly two-thirds of Ontarians say they spend more than 30% of their budget on housing. This is directly leading the country towards an unmanageable housing crisis.

It’s Official: Qatar Had A Role In Taliban 2.0

The fact that the former president of Afghanistan, Ashraf Ghani, abandoned his people is hard to digest. The documents emphasise that Ajmal Ahmadi received $110 million on behalf of the former president of Afghanistan, Ashraf Ghani. Five weeks after the payment of the amount at the Embassy of Qatar in Kabul, Taliban entered the capital without any resistance. What made Ashraf Ghani, who had earlier promised that he is not going to let Afghanistan fall into the hands of Taliban, suddenly flee the country? Qatar definitely had a role in the resurgence of Taliban 2.0.

When it comes to safeguarding national interests, the Canadian Prime Minister scurries away. The country now seems to wake up to the Chinese challenge when the warning bells finally start ringing. According to reports being investigated by the Department of National Defence, the Chinese government may be paying Canadian military fighter jet pilots to train Beijing’s air force. “My focus is on the national security of Canada and Canadians. Now, the country has emerged to be a national security threat in Trudeau’s land.

African nations have abundant lithium reserves, and rising demand could significantly enhance the continent’s economy. But much to their chagrin, African nations are thwarting every attempt of the West to further stymie the growth process of the continent. Numerous examples demonstrate how US-based MNCs’ parasitic activities deprive developing African countries of an equitable possibility to benefit from their own natural resource wealth. Saudi Arabia, the world’s largest oil exporter, has set the most ambitious targets for electric vehicle manufacturing. The American aspirations to dominate the electric vehicle sector would inevitably fall apart.

We all have heard the saying that “Jeffrey Epstein didn’t kill himself”, although it has not been proven yet. The leaders of the Democratic Party, who have not been forthcoming on this issue, once had good relations with Epstein. Democrats and EpsteinThe disgraced sex trafficker, Jeffrey Epstein, had close ties with many Democratic Party leaders. She alleged that the company facilitated Epstein in the sexual exploitation of underage girls in the US Virgin Islands and other regions. Time and again, any calls for transparency in this case have been dashed by the Democratic Party which has used its influence to silence any voice of justice.

4 minutes ago - Zelensky makes ‘wings for freedom’ plea in surprise UK visit to push case for fighter jets 4 minutes ago - Earthquake in Turkey and Syria: How to help 4 minutes ago - INSP Stock, IBD Stock Of The Day, Breaks Out On Massive Sales Growth 7 minutes ago - Haaland looking for immediate Man City exit after finance scandal erupts and rift with Guardiola emerges 10 minutes ago - "Strongest possible XI" "Cooking" - Real Madrid fans in cloud nine as key player returns to lineup for Al Ahly clash 10 minutes ago - Where it went wrong for Mark Fotheringham at Huddersfield Town and what comes next 13 minutes ago - Mitchell native presents early literacy research to lawmakers, public in South Dakota State Capitol 19 minutes ago - Topstep vs FTMO 2023: Which Platform Offers the Funding You Need? 24 minutes ago - Pixel Deals Everywhere: Save on phones, watches, and earbuds 32 minutes ago - One year in office: Councilmember Crystal Hudson talks wins, losses, and her plans for the future • Brooklyn Paper 34 minutes ago - The coaching changes for USMNT players at Leeds, Norwich, Valencia, and Hoffenheim 36 minutes ago - The best tweets about LeBron James breaking the NBA scoring record 36 minutes ago - Anglican Church seeks to use ‘gender-neutral’ language when referring to God 37 minutes ago - AAPL: See Why It Went from “Fall from Grace” to “Solid Bet” 39 minutes ago - North Korean leader Kim brings daughter to visit troops 39 minutes ago - Zelensky meets King Charles, asks Britain for warplanes 40 minutes ago - Stocks Slide as Traders Boost Fed Peak-Rate Wagers: Markets Wrap 40 minutes ago - Manchester United vs Leeds live stream and how to watch the Premier League 42 minutes ago - Brera Holdings PLC to Ring the Nasdaq Stock Market Closing Bell at Times Square in New York on February 9, 2023 Celebrating its $7,500,000 IPO 47 minutes ago - Concerns over future of dentistry in Northern Ireland amid NHS exodus into private sector 47 minutes ago - Championship close to breaking league record for most managerial changes in one season with 16 so far 55 minutes ago - Playbook PM: On the level — Almost jets to Ukraine — Inside the Hall 57 minutes ago - Pope Francis on his trip to Africa: God places his hope in the humble 58 minutes ago - Google: My Top Stock For 2023 (NASDAQ:GOOG) 1 hour ago - On Reading the News 1 hour ago - UK could send fighter jets to Ukraine and train pilots as Zelensky visits Number 10 1 hour ago - AP Top News at 11:45 a.m. EST 1 hour ago - North Korean hackers have stolen up to $1 billion in virtual assets according to the UN: ‘A record-breaking year’ 1 hour ago - Diversification of economy will boost, stabilise Nigeria’s GNI – S. Korean expert 1 hour ago - UN experts: North Korean hackers steal record virtual assets 1 hour ago - Manchester United vs Leeds United: How to watch EPL Online in Canada – Film Daily 1 hour ago - Sunderland vs Fulham live stream and how to watch the FA Cup fourth round replay 1 hour ago - Explained: why Manchester United vs Leeds is not on TV tonight 1 hour ago - China's Spy Balloon Offers a Lesson About the Dangers of Miscommunication 1 hour ago - Erling Haaland Transfer: Manchester City ACE striker Plan ESCAPE from Premier League, Haaland seeks Real Madrid as new destination – Check Out 1 hour ago - AI Might Not Be The Answer For Your Homework Yet: Google Bard Gives This Wrong Answer At Launch By Benzinga 1 hour ago - Man Utd takeover: Qatar investors have plan for Champions League rules with mammoth bid 1 hour ago - Filgrastim Biosimilars Global Market Report 2023 1 hour ago - AP Top News at 11:25 a.m. EST 1 hour ago - Ebullient ABC Swoons for ‘Fired Up & Fiery,’ ‘Hopeful’ Biden vs. ‘Bitter & Rude’ Republicans 1 hour ago - Pump Rules' Tom Schwartz Doesn't Regret Hookup With Raquel Leviss 1 hour ago - Women's Basketball to Host Purdue on Thursday Night 1 hour ago - Japan’s New Defense Budget Is Still Not Enough 1 hour ago - “When Croatia qualified, we started celebrating as if we’d won” - Argentina star Papu Gomez makes incredible 2022 FIFA World Cup admission 1 hour ago - Drink, drugs and defrauding the state: the spectacular fall of Jared O’Mara 1 hour ago - Between Coldness and Adoration: A Zainichi Korean’s Experience in Japan 1 hour ago - Kim takes daughter to troop visit 1 hour ago - Barcelona fans see EU court bid over Lionel Messi's move to PSG rejected 2 hours ago - UK to investigate sending jets to Ukraine amid plans to train pilots 2 hours ago - Man United vs Leeds United live stream, TV channel, lineups, betting odds for Premier League clash 2 hours ago - Former Sheffield MP Jared O’Mara found guilty of six counts of fraud to fund cocaine habit 2 hours ago - Daniel Levy makes Tottenham transfer claim and reveals why his manager dream is 'very difficult' 2 hours ago - Sunak hopeful over formal charges at ICC against Russian officials ‘shortly' 2 hours ago - Laughing King Charles gives awkward response to request to 'bring back' Prince Harry 2 hours ago - ‘Wings for freedom’: Zelensky tours European cities urging air support 2 hours ago - Wrexham finally bow out of the FA Cup, plus Paris Saint-Germain's post-World Cup slump 2 hours ago - King Charles Hosts Ukraine's President Zelenskyy at Buckingham Palace During Surprise Visit to the U.K. 2 hours ago - Sheffield United, Wrexham and the reason you watch to the end of the credits 2 hours ago - Why is Manchester United vs Leeds not on TV tonight? 2 hours ago - Zelenskiy, touring Europe, wins UK pledge to train pilots on NATO jets