Putin says Russia will not nuclear bomb against Ukraine 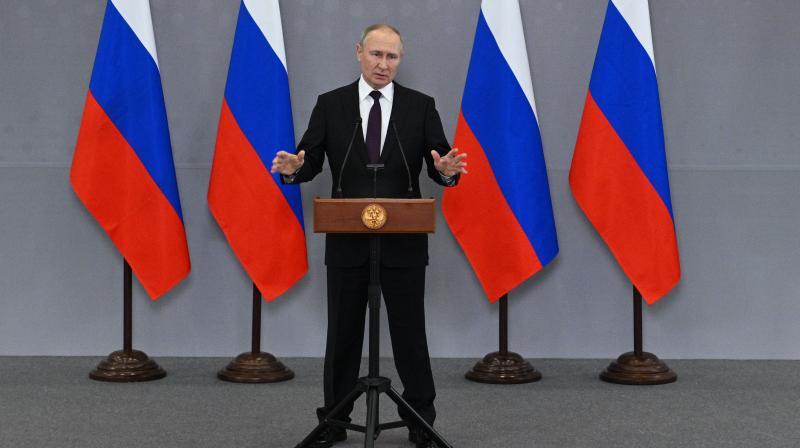 Speaking at a conference of international foreign policy experts, Putin said it's pointless for Russia to strike Ukraine with nuclear weapons. Putin said an earlier warning of his readiness to use all means available to protect Russia didn't amount to nuclear sabre-rattling but was merely a response to Western statements about their possible use of nuclear weapons. Without offering evidence, the Russian leader repeated Moscow's unproven allegation that Ukraine was plotting a false flag attack involving a radioactive dirty bomb it would try to pin on Russia. Ukraine argued Russia might be making the unfounded allegation to serve as a cover for its own possible plot to detonate a dirty bomb. He mocked the allegations by Ukraine and the West that Russia was firing on the territory of the Zaporizhzhia Nuclear Power Plant in southern Ukraine as ravings.
Continue reading...

Kohli powers Indian win over Pakistan with a magical knock

Hardik Pandya, the most important cog in India's T20 wheel, struck 40 off 37 balls in a partnership of 113. In no time, India were 31 for 4 and Kohli and Pandya needed to consolidate for the next four overs without losing wicket. Pandya and Kohli, both disciples of the peerless Mahendra Singh Dhoni understand the grammar of chasing in T20 cricket and how to pace the innings. India needed 60 from last five overs but Rauf and Naseem gave only six runs each in the 16th and 17th over. Earlier, Arshdeep bowled a dream first spell and Pandya displayed his true worth in the back-10 as India restricted Pakistan to a manageable 159 for eight.

Many temples in Andhra Pradesh closed due to solar eclipse

Vijayawada: In view of the partial solar eclipse or Surya Grahanam, almost all temples in Andhra Pradesh remained closed on Tuesday and daily rituals remained suspended for the day. The other temples under the TTD including the Govindaraja Swamy and Kodandarama Swamy temples in Tirupati, the Padmavati Ammavaru temple in Tiruchanoor, the Kalyana Venkateswara Swamy temple in Srinivasamangapuram and the Abhaya Venkateswara Swamy temple in Appalayagunta also remained closed for the eclipse. Further, all temples in Krishna, NTR, Guntur, Palnadu and Bapatla districts were closed for the day due to the solar eclipse. The Mallikarjuna Swamy and Bramarambika temple at Srisailam, Mahanandi and the Ahobilam Sri Narasimha Swamy temples in Kurnool were closed till the evening on Tuesday. All the temples in Nellore and Prakasam districts also remained closed from 12 noon in view of the eclipse.

Delhi's air quality turned "very poor" on Monday morning. The capital's air quality index (AQI) stood at 326 at 8 am on Tuesday. The neighbouring cities of Ghaziabad (285), Noida (320), Greater Noida (294), Gurugram (315) and Faridabad (310) reported 'poor' to 'very poor' air quality. The System of Air Quality and Weather Forecasting and Research (SAFAR) had earlier predicted that the air quality in Delhi will be recorded in the 'very poor' category if no firecrackers are burst. In case firecrackers are burst like last year, the air quality may plunge to 'severe' levels on the night of Diwali itself, it had said.

Nehru to be blamed for PoK mess, says BJP

He further added that Mr Nehru then took an "internal issue" to the United Nations, making Pakistan a party. Mr. Bhatia claimed that then home minister Vallabhbhai Patel was against the measures pushed by Mr Nehru. In a speech made in Parliament in July 1952, Mr Nehru spoke about the issue. "But what was it that Mr Nehru so desperately wanted that not even an invasion moved him? Finally, in the same letter to Mr Mahajan, Mr Nehru revealed his desire in writing and so we can count on Mr Nehru’s own words rather than hearsay.

The strategy emphasises “climate justice”, “sustainable lifestyles” and principles of equity and common but differentiated responsibilities and respective capabilities. “LT-LEDS has been prepared in the framework of India's right to an equitable and fair share of the global carbon budget. The strategy emphasises energy security, energy access and employment while focusing on the vision of “Aatmanirbhar Bharat” (self-reliant India) and “Make in India”, Yadav said. India also called upon developed countries to elaborate on their immediate plans on how they would achieve their targets. “We see that following the current energy crisis, many have turned back to increased fossil fuels for energy security.

Australia's Pat Cummins, right, congratulates New Zealand captain Kane Williamson following their T20 World Cup cricket match between Australia and New Zealand in Sydney on Saturday. (Photo: AP)SYDNEY: New Zealand thrashed hosts and defending champions Australia by 89 runs on Saturday to start the Twenty20 World Cup Super 12 in style and avenge defeat in last year's final. Conway's knock came from just 58 balls with seven fours and two sixes, joining a select group to make 90 or more at a World Cup. It was New Zealand's first win against Australia in Australia in any format since 2011. "They (New Zealand openers) set the tone in the first four overs and we didn't recover," said skipper Finch.

New Zealand thrashed hosts and defending champions Australia by 89 runs on Saturday to start the Twenty20 World Cup Super 12 in style and avenge defeat in last year's final. Conway's knock came from just 58 balls with seven fours and two sixes, joining a select group to make 90 or more at a World Cup. It was New Zealand's first win against Australia in Australia in any format since 2011. Hazlewood removed Glenn Phillips for 12 before Jimmy Neesham hit a six off the final ball to reach 200. Australia next meet Sri Lanka in Perth on Tuesday while New Zealand face Afghanistan in Melbourne a day later.