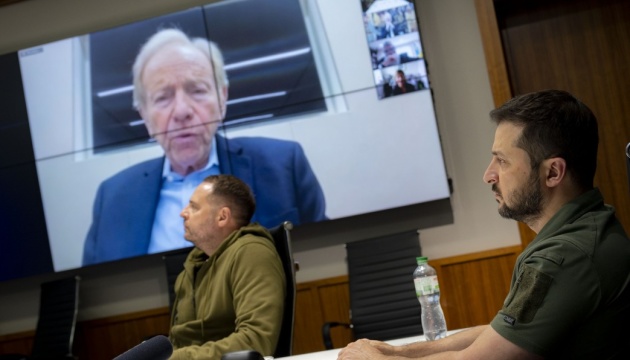 Ukrainian President Volodymyr Zelensky has held a meeting with influential representatives of the world’s Jewish communities, which was dedicated to the importance of protecting universal values, guaranteeing security and peace, and preserving historical memory. President of the World Jewish Congress Ronald Lauder, ex-U.S. According to the President of Ukraine, the people of Ukraine and Israel have a lot in common. Then we will fight against it post factum with the whole world,” Zelensky noted, emphasizing the need to act more decisively and in unity as soon as now. In this context, the parties discussed the continuation of the construction project of the Babyn Yar Holocaust Memorial Center.
Continue reading...

Units of the Ukrainian defense forces have repelled attacks by Russian troops outside the settlements of Bakhmut, Klishchiivka, Novomykhailivka, Marinka, Nevelske, Pervomaiske, and Avdiivka in the Donetsk region. According to the General Staff, as of 18:00 on October 23, Russian troops are trying to hold temporarily captured territories and improve their tactical position. The invaders are shelling the positions of Ukrainian troops along the contact line and conducting aerial reconnaissance. In total, Russian troops carried out two missile and 25 air strikes and about 30 attacks using multiple launch rocket systems. In the Southern Bug direction, Russian troops attacked the military and civilian infrastructure of settlements located near the contact line.

Terror as сornerstone of “Russian world”

From 6 to 14 September, about 8,500 square kilometers were liberated in Kharkiv region, including 388 settlements with a population of 150,000. Consequently, acts of terror were an integral part of the occupation agenda even before Russian missiles targeted Ukrainian cities. In Kharkiv region, abductions and intimidation were also widely used against school teachers who refused to work for Russia. “It is currently impossible to identify all the people affected by the Russian occupation forces, as part of the population was taken to the Russian Federation by the occupation troops. The liberated Kharkiv region has highlighted the infrastructure of terror set up by Russian in the occupied territories.