Pope says criticism is annoying, but can be helpful 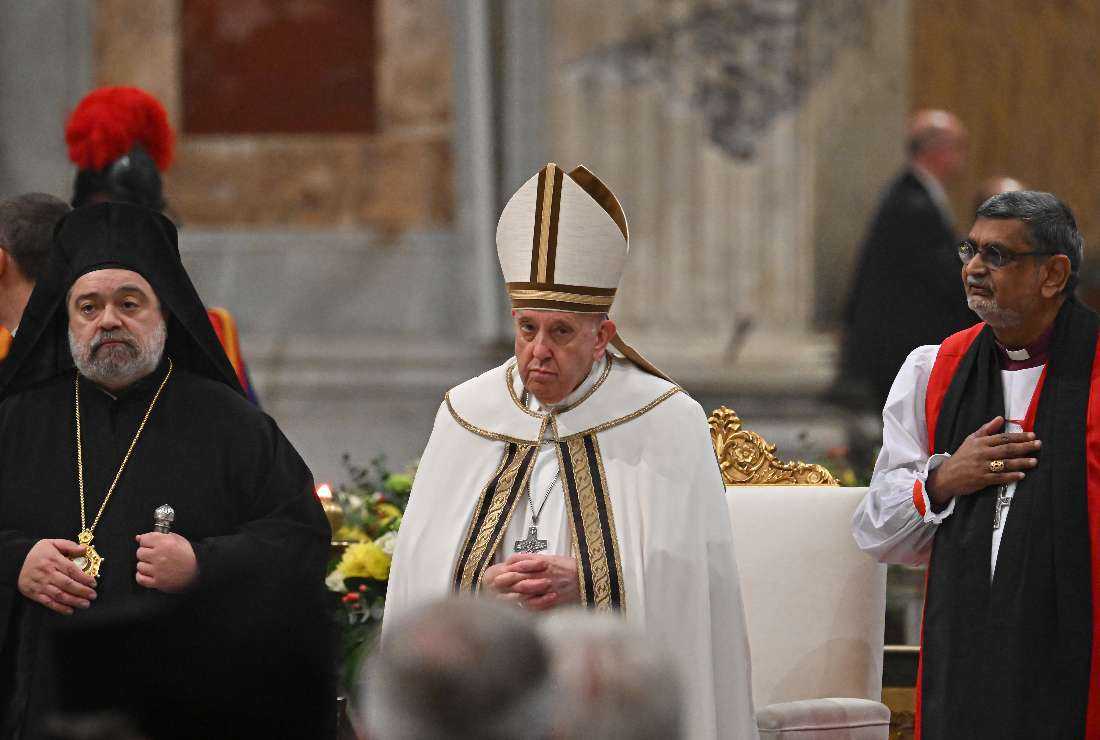 (Photo: AFP)Public criticism by cardinals and bishops is annoying -- "like a rash that bothers you a bit," Pope Francis said -- but differences need to be aired and criticism can be helpful, he told the Associated Press. In the discussion about homosexuality, Pope Francis said that "being homosexual is not a crime. Pope Francis objected to the idea that criticism has increased since Pope Benedict died and that somehow it is related to the late pope no longer being around to quiet the critics. As he had done shortly before Pope Benedict's death, Pope Francis also told AP that he had no plans to issue norms for how a retired pope should live and dress and what he should be called. Pope Francis insisted he is "in good health," at least "normal" for his age, which is 86.
Continue reading...

Chinese 'police stations' in Canada being probedChina denies illegal activity, says the posts offer services such as driver's license renewals to Chinese nationals abroadCanadian and Chinese flags prior to a meeting between Canada's Prime Minister Justin Trudeau and China's President Xi Jinping at the Diaoyutai State Guesthouse in Beijing on Dec. 5, 2017. (Photo: AFP)Canadian federal police said Thursday they are investigating reports that China has set up illegal police stations in the North American nation and harassed Chinese expatriates. China, however, denied accusations of illegal activity, saying the locations simply offer services -- such as driver's license renewals -- to Chinese nationals abroad. According to Safeguard Defenders, the police stations have been used by Chinese police to carry out policing operations on foreign soil, and pressure Chinese nationals to return to China to face criminal charges. Canada's public broadcaster, meanwhile, said a journalist and rights activist who moved to Canada from China in 1989 claimed to have been repeatedly targeted by Chinese officials online.

Now Beijing has given the Hong Kong government the green light to block Owen, and indeed to veto any defendant’s choice of lawyer. Ten years ago, the situation in both Myanmar and Hong Kong was very different. In Hong Kong, while “one country, two systems” was showing some signs of strain, no one predicted then its total destruction a decade later. Suu Kyi had been released from years under house arrest and was in dialogue with the then-military ruler, Thein Sein. The titles speak for themselves — God is Love, In Hope We Were Saved and Charity in Truth.

'Bikini killer' Charles Sobhraj flies to France after releaseNepal's top court rules that he be freed on health grounds and deported to France within 15 daysFrench serial killer Charles Sobhraj sits in an aircraft from Kathmandu to France, on Dec. 23. (Photo: Atish Patel/AFP)French serial killer Charles Sobhraj, responsible for multiple murders in the 1970s across Asia, was due to arrive in France Saturday after almost 20 years in prison in Nepal. Including the state of Nepal," Sobhraj told AFP on Friday onboard the plane. Asked if he thought he had been wrongly described as a serial killer, the 78-year-old said: "Yes, yes." Nicknamed the "bikini killer", Sobhraj was eventually linked to more than 20 murders.

One dead, dozens hurt in stampede at Iraq Gulf Cup finalStampede broke out outside the football stadium in southern Iraq hours before the final matchIraqi stadium security team members carry an injured football fan into an emergency area at the Basra International Stadium following a stampede ahead of this evening's final match of the Arabian Gulf Cup between Iraq and Oman, in Basra on Jan. 19. (Photo: AFP)One person was killed and dozens injured Thursday during a stampede outside an Iraqi football stadium hours before the Gulf Cup final, officials said. Fans began arriving again in the afternoon as calm was restored to Basra International Stadium, said interior ministry spokesman Saad Maan. 'Doing honour to Iraq'Prime Minister Mohammed Shia al-Sudani had earlier chaired a meeting with key ministers and the governor of Basra to discuss "special measures for the Gulf Cup final", his office said. The Gulf Cup was contested by Bahrain, Kuwait, Oman, Qatar, Saudi Arabia, the United Arab Emirates and Yemen as well as Iraq.

80 years of Vatican ties with the Republic of China

Thai rescuers hopeful for missing sailorsDozens of sailors went missing when their naval vessel, HTMS Sukhothai, sank late Sunday in the Gulf of ThailandRelatives of missing sailors wait for news at Bang Saphan Pier in Prachuap Khiri Khan on Dec. 20 during the search operation for survivors after the Thai naval vessel HTMS Sukhothai capsized and sank about 37 kilometers (22 miles) off the coast on Dec. 18. (Photo: AFP)Rescuers in helicopters scoured the Gulf of Thailand on Tuesday for dozens of sailors who went missing when their naval vessel sank, hoping life jackets had helped them survive two nights in the choppy waters. Thai warship the HTMS Kraburi left port to resume the search early Tuesday, scanning the turbulent waters for 30 missing sailors alongside other naval vessels and two Seahawk helicopters. Efforts to find the missing crew were focused on aerial searches, with the Royal Thai airforce assisting the operation. The HTMS Sukhothai was commissioned in 1987 and built in the United States by the now-defunct Tacoma Boatbuilding Company, according to the US Naval Institute.

Nuncio urges Malaysian Catholics to help poor churchesChurch facilities in East Timor were built with donations from Malaysia, Singapore and Brunei, says Archbishop ZaluskiArchbishop Wojciech Załuski, the Apostolic Nuncio to Malaysia blesses the Catholic Archdiocesan Center in Kota Kinabalu on Nov 12. (Photo: Catholic Sabah)The Vatican ambassador to Malaysia has urged Catholics in the country to generously help poor churches across Asia. Archbishop Zaluski, also the Apostolic Delegate to Brunei, made the appeal while inaugurating the Catholic Archdiocesan Center (CAC) of Kota Kinabalu Archdiocese in the Malaysian state of Sabah on Nov. 12, reported todayscatholic.com, the archdiocesan news website. The Church leader said he was happy to learn Catholics in Kota Kinabalu contributed most funds needed for the Catholic Archdiocesan Center. The Malaysian Church has 1.17 million Catholics in three archdioceses and six dioceses.