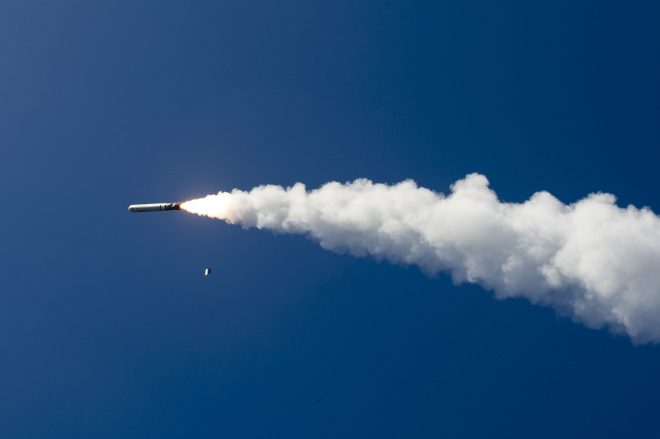 THE PENTAGON — The Defense Department officially abandoned the effort to pursue a nuclear sea-launched cruise missile, according to the Nuclear Posture Review unveiled today. The idea of a sea-launched nuclear cruise missile was introduced in the 2018 NPR to provide a low-yield warhead option to as a response to the use of an adversary’s tactical nuclear weapon. In addition, the U.S. developed the low-yield W76-2 warhead for its ballistic nuclear missile submarine fleet. Lawmakers have questioned the Pentagon’s departure from the SLCM-N program following a USNI News report last year on a Navy budget document that called for eliminating the program. In addition to the NDS and the Nuclear Posture Review, the Defense Department also released a Missile Defense Review that identifies both China and Russia’s missile modernization, including hypersonic weapons, as a persistent challenge to U.S. forces in the Pacific.
Continue reading...

Russia’s invasion of Ukraine has dramatically altered how the seven western nations in the Arctic Council approach the High North, creating a new emphasis on security in the region, a panel of regional diplomatic and security experts said Tuesday. “We’re in new space,” David Balton, executive director of the Arctic Executive Committee in the Office of Science and Technology, said. The report itself calls for increased interoperability among those nations’ armed forces and information sharing on security matters. As an example of interoperability, Pollock noted the seven nations bring several hundred F-35 Lightning II Joint Strike Fighters to the security equation. Devon Brennan, director of maritime and Arctic Security at the National Security Council, said there is a military component to the deepening of the Nome port in Alaska.

The following is the Nov. 15, 2022, Congressional Research Service, Defense Primer: Naval Forces. From the report“Naval Forces” Refers to Both the Navy and Marine CorpsAlthough the term naval forces is often used to refer specifically to Navy forces, it more properly refers to both Navy and Marine Corps forces, because both the Navy and Marine Corps are naval services. For further discussion, see CRS In Focus IF10484, Defense Primer: Department of the Navy, by Ronald O’Rourke. U.S. Strategy and Naval ForcesU.S. naval forces give the United States the ability to convert the world’s oceans—a global commons that covers more than two-thirds of the planet’s surface—into a medium of maneuver and operations for projecting U.S. power ashore and otherwise defending U.S. interests around the world. The battle force ships counting method was established in the early 1980s and has been modified by subsequent legislation.

"Over the past four seasons, Lisa and Jonah have taken viewers on a mind-bending odyssey, raising the bar at every step," HBO said in a statement on Friday. Nolan and Joy added in their own statement through banner Kilter Films: "Making 'Westworld' has been one of the highlights of our careers. In October, Nolan and Joy told Variety that they had hopes for a fifth and final season to conclude the show as they had planned. "We had always conceived of a fifth and final season," Nolan said during an interview about his and Joy's new Amazon Prime Video series, 'The Peripheral'. The eight-episode fourth season of 'Westworld' premiered June 26.

The University of Tennessee, Knoxville, welcomes fans to campus Saturday, Oct. 29, for the football game against the University of Kentucky. Fans are encouraged to visit utsports.com/gameday/football for the latest updates on game information. For more information, including downtown parking options for fans without a football parking permit, visit the Parking and Transit Services football web page. Fans are invited to stay for the watch party and cheer on the Vols throughout the game. Unmanned aircraft systems are prohibited on university property beginning four hours before the scheduled kickoff time of a football game, during the game and for two hours after the conclusion of the game.

Children Targeted in a Moral Revolution

/en/features/children-targeted-in-a-moral-revolution{456AC554-B16B-4B88-8746-0E4ADFF5B44D}Children Targeted in a Moral RevolutionDoug Clay on October 27, 2022 by Share Tweet PRINTDon't miss any stories. Many of us could have never imagined how quickly and aggressively the transgender revolution would target our children. Let’s pray that the hearts of our children will be guarded from the shifting winds of emotion and culture. Let’s pray for our children to put their faith in Jesus and keep looking to Him for answers to life’s difficult questions. Let’s pray that the seeds planted in the hearts of our children will grow into fruit that will last.