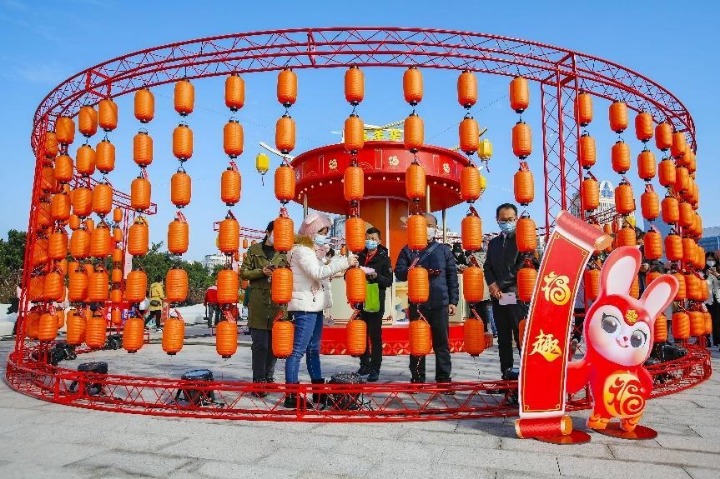 It believes that China's economy will speed up recovery and inject a stronger impetus into global economic development. However, they cannot weaken the international community's confidence in China's economic development, but will only expose the ignorance and prejudices of these Western media outlets. China's COVID-19 response philosophy has been consistent. In 2020, China's GDP grew 2.2 percent and exceeded 100 trillion yuan ($14.75 trillion), making China the only major economy that reported positive economic growth that year. China's foreign trade in goods has continuously expanded, from 32.16 trillion yuan in 2020 to 39.1 trillion yuan in 2021, and to 42.07 trillion yuan in 2022.
Continue reading...

Democracy dies when money knocks on the door

By Xin Ping | chinadaily.com.cn | Updated: 2022-10-26 09:23Cai Meng / China DailyDark money is pouring into the US political arena as the 2022 midterm elections approach. Not shying away from the truth, he told the secret of the long-standing "money politics" in the United States. In various elections across the US, it takes a lot of money to remind the public of a candidate's existence. "When it takes $14 billion to elect a president, you wonder what kind of democracy is this? Perhaps the knocking of dark money is too loud for American politicians to hear the voice of the people.

Asian Americans prideful of US coin for Anna May Wong

[Photo/Agencies]The news of Chinese American actress Anna May Wong becoming the first Asian American to appear on US currency has been met with excitement and hope from the Asian American community. Anna May Wong was born Wong Liu Tsong on Jan 3, 1905, in Los Angeles. Wong is one of five women being honored in the American Women Quarters Program, which seeks to highlight the accomplishments and contributions of American women. Wong was given the part of a prominent and sympathetic Chinese American doctor in The King of Chinatown in 1939. Her role in that film was considered a breakthrough for Wong and other Asian American actors.

By EARLE GALE in London | chinadaily.com.cn | Updated: 2022-10-20 20:35British Prime Minister Liz Truss announces her resignation, outside Number 10 Downing Street, London, Britain October 20, 2022. [Photo/Agencies]The chaotic and short premiership of the United Kingdom's Prime Minister Liz Truss ended abruptly on Thursday with her announcing her resignation. On Thursday, after meeting with the leader of the group that represents the rank-and-file lawmakers within her ruling Conservative Party, Truss said from Downing Street that she would stand down immediately. Truss only assumed power in September, after a political coup within the ruling Conservative Party got rid of her predecessor, Boris Johnson. Truss was only in office for 45 days, making her term in office the shortest of any prime minister in British history.

Divided US at mercy of midterm partisan feuds

JOE RAEDLE/AFPWith a week to go before the United States midterm congressional elections, the outcome of fierce partisan contests could determine the near-term path of US politics. All the seats in the House and about one-third of the 100 Senate seats are up for grabs this year. The story of the final days of the campaign has been a Republican incursion into the Democrats' backyard, with candidates eyeing opportunities for House seats that were once out of reach. "Democrats are certainly poised to lose seats in the House and perhaps also in the Senate," Jillson said. Meanwhile, a hammer attack on US House Speaker Nancy Pelosi's husband has sparked increased fears over political violence in the country, British newspaper The Guardian reported.

[Photo/Agencies]LONDON - Big-spending Chelsea were scrambling to sign Enzo Fernandez in the final minutes of the January transfer window on Tuesday as Joao Cancelo left Manchester City for Bayern Munich and Jorginho swapped Chelsea for Arsenal. Reports say Chelsea club officials are in Lisbon to complete the deal. Cancelo joins BayernBayern Munich have signed City wing-back Cancelo on loan until the end of the season and will have an option to buy him for a reported 70 million euros ($76 million). Premier League leaders Arsenal signed Italy international Jorginho from Chelsea for a reported fee of 12 million. Antonio Conte's Tottenham remained hopeful of finalising a reported 39.7-million transfer of Sporting Lisbon defender Pedro Porro.

Xi sets forth a long-term strategic blueprint for China

[Photo/Xinhua]General Secretary Xi Jinping's speech at the opening ceremony of the 20th CPC National Congress set forth a long-term strategic blueprint for China to navigate its own development in a rapidly changing and extremely volatile and unpredictable world. This will require further development of technology industries, aeronautics and space exploration, and environmental technologies to address climate crisis and energy efficiency. China's leadership has recognized the risks inherent in a debt-driven social media-based economy, as has been embraced by many Western nations. The impact on foreign investment will be to shift away from lower-level manufacturing of cheap products for export, real estate and tourism, shifting more toward higher technology, technology services and key industrial investment. The message is that past emphasis on economics alone is not enough.

Measures to increase births expected to be introduced

[Photo by GONG BO/FOR CHINA DAILY]Boosting fertility remains central to nation's population policy in the futureMore comprehensive and concrete measures aimed at encouraging births will be rolled out in China to meet public expectations and increase fertility rates, experts said. China's fertility rate dropped below the replacement level of 2.1 — the minimum threshold for keeping a stable population — in 1992 and has remained at a low level since. He said one of the most important tasks is to consolidate sporadic measures seen in localities and elevate them to a national level. China had about 267 million elderly people by the end of last year, accounting for 18.9 percent of the population. "As we strive for common prosperity, seniors could be left behind and we should ramp up care for them," he said.

Sunak takes the helm at critical time for UK

Sunak, 42, became Britain's new prime minister on Tuesday after meeting King Charles III in Buckingham Palace. He is the country's first prime minister of Indian origin and the youngest in more than 200 years. He replaced Liz Truss, who held the job for only 45 days, making her the shortest-serving prime minister in British history. The new prime minister will also need to maintain the balance of public finances in the UK. Besides domestic problems, Sunak also faces external challenges such as relations with the European Union, Ding added.