Jacinda’s Legacy: The Good, the Bad and the really really ugly 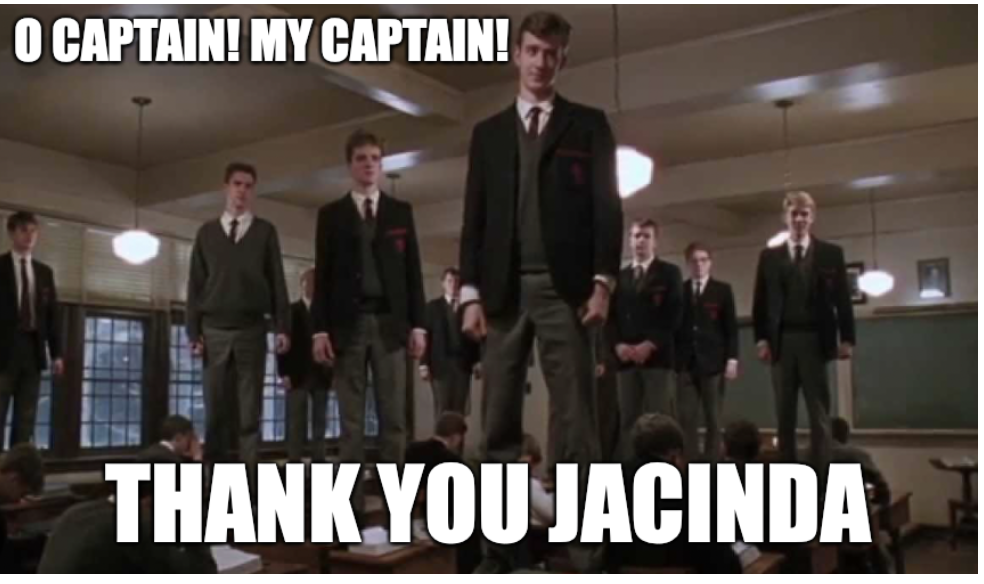 Trying to unpack the youngest Prime Minister who was the first to give birth while in the role, a Prime Minister who is lauded overseas and threaten at home. Every women who matters to me walks 2 inches taller with pride at Jacinda’s leadership. When Ardern became prime minister in October 2017, New Zealand’s annual GDP growth was a modest 3.0 per cent which ranked 19th in the OECD. …you can’t pretend that Jacinda didn’t have serious policy wins and strong results. A Prime Minister who reset leadership dynamics while juggling national emergencies with an emotional intelligence that will echo down the corridors of history.
Continue reading...

Read On "The Daily Blog"

More News On "The Daily Blog"

What should NZ do about Iran? Russia? China? Israel? Australia? America? UK? The Pacific?

What backlash it provokes and how China responds to any criticism of their Covid response are all very open questions. China, Russia and Iran are all highlighting the true fragility of Authoritarian regimes commanded by an undemocratic Autocrat. Does China respond to protests with an external military adventure aimed at taking some of the Island chains off Taiwan? Are going through the current power tug of war between America and China, will need more aid thanks to more catastrophic climate events. I never want to see a NZ military that raise its hand to attack, but we must have one that can raise its hand to defend.

27 days ago The Daily Blog

Time for a Change

A system which, by its peculiar nature, made such an outcome entirely predictableBack in the 1972, when the newly-elected Labour government’s election slogan had been “Time for a Change”, NZ Herald cartoonist, Minhinnick, greeted the result with a cartoon cynically rearranging the words to read “Change for a Time.” And given the nature of our political system, however contemptuous his cartoon was of the electorate’s decision, the cartoonist was absolutely right – it was “change for a time” – and isn’t that our problem? Another way to describe how our systems works is to say we are devouring our children’s tomorrows. Whatever, there has to be a better way and fundamental to finding that “Better Way” must be a frank and fair discussion about the purpose of society, a concept which the odious Margaret Thatcher, one of the architects of neo-liberalism, said doesn’t exist. Demeny’s motivation behind proposing such a system was to make the political system more responsive to the plight of those most adversely affected by it, but who had no voice. In the meantime we have lost someone who, despite herself being part of the system, deserved better than the vileness she was subjected to.

Political Roundup: Labour shifts focus from Grey Lynn to West Auckland The days of the Labour Government being associated with middle class social liberalism look to be numbered. It was precisely what he needed to do.” Smart for Hipkins to focus on the economy Matthew Hooton writes in The Australian today that Hipkins is smart to focus Labour on the economy – it’s the overwhelming voting issue for 2023. And when the poll asked the public who they thought could best tackle inflation, 49 per cent chose National, with only 23 per cent favouring Labour. On the economy in general, National is favoured by 50 per cent, to Labour’s 27 per cent. TDB Recommends NewzEngine.com Labour desperately needs to turn around the perception that the party isn’t focused on economic issues during a recession.

More Than One Way To Skin A Cat.

Senior executives, producers, journalists, technical staff and, seemingly, the entire workforce of the public broadcasters, subscribe to a single version of economic, political, social and cultural reality. Perhaps it is this complete indifference to the traditions of free inquiry and frank debate that enlivened the public broadcasters of yesteryear that explains the new entity. Committed to public service broadcasting, RNZ management and staff contrived to do more with less year after year. In the estimation of both the RNZ Board, and its CEO, the time had come for a mighty shake-up. Not to worry, there is always more than one way to skin a cat.

Because I am a political tragic, I was listening to this incident David is suddenly furious about and if I remember correctly Golriz was completely righteous for giving David shit! TDB Recommends NewzEngine.comGolriz escaped Iran and the mutation it deformed into thanks to the CIA coup and it is righteous that she leads this condemnation of Iran. David’s demand that Golriz submits to him before he allows the motion through is giving off a really weird vibe. You are many things David, spiteful ain’t one of them. Golriz is right, we should condemn Iran immediately.

Much Worse Than It Looks

THE REID RESEARCH POLL is much worse than it looks. As the political rancour grows, the inclination of “mainstream” voters to “sit this one out” will grow along with it. Voters shut their doors against the unpleasantness and determine to have nothing to do with the extremists on both sides. That these changes – at least on the “transformational” scale suggested by the Prime Minister – have not eventuated, cannot help but contribute to a mood of disillusionment among “Jacinda’s” most loyal supporters. Small wonder New Zealanders feel disappointed, concerned, and angered by their Prime Minister.

There are predictably political winners and losers of this manufactured recession. Mental Health – Economic recession and job loss is going to cause an enormous demand upon a mental health system that is already failing. It was right for Grant to do that, but the economic ramifications and the property bubble it generated have a political price. Despite the recession and Labour’s woeful delivery, National still can’t capture any real support for their own totally rudderless economic vision. This will quickly feel like a crisis and the political question then becomes what do you as a voter feel.

2 months ago The Daily Blog

14 minutes ago - NBA-LeBron rewrites playbook on athlete activism on way to the top 16 minutes ago - Madonna shares raunchy kiss with rapper and songwriter Jozzy 17 minutes ago - What the papers say: Wednesday’s front pages | Kildare Nationalist 18 minutes ago - Emirates Development Bank, ADGM to partner on initiatives for business establishment and expansion 20 minutes ago - Man Utd takeover: 5 things Qatari investors have planned as they launch mammoth bid 20 minutes ago - Zelenskyy to visit UK for first time since Russia's invasion – KION546 21 minutes ago - Church of England to ponder classifying God as gender-neutral 21 minutes ago - Kim Jong Un puts daughter front and center at lavish military banquet 22 minutes ago - John Cleese to return for reboot of iconic sitcom ‘Fawlty Towers’ 23 minutes ago - Deaths in Leitrim - Wednesday February 8, 2023 24 minutes ago - Will this be LeBron’s last huge moment in NBA? 24 minutes ago - From crash to investigation, the chronology of the case of flight MH17 in Ukraine 25 minutes ago - Fawlty Towers to return to screens with John Cleese after more than 40 years 25 minutes ago - Carlos Corberan shares social media message after penning West Brom contract extension amid Leeds United links 29 minutes ago - Bond Girl Gemma Arterton welcomed first child in December with Peaky Blinders star husband 33 minutes ago - Transcript: Biden’s second State of the Union address 34 minutes ago - Who is Leonardo Dicaprio Dating? Is He Dating a Teen Age Model? 36 minutes ago - Manchester United vs Leeds prediction: How will Premier League fixture play out tonight? 42 minutes ago - February 08: Today’s top stories in 60 seconds 42 minutes ago - 'Don't sleep on Jersey': Why NJ will be front and center for 100 million Super Bowl TV viewers 43 minutes ago - Ukraine's Zelenskiy To Visit U.K. As London Expected To Announce New Military Aid 45 minutes ago - Turkey and Syria earthquake: how and where to donate in Australia to help the victims 47 minutes ago - Marco Silva slams touchline ban as Fulham boss vows not to change despite missing FA Cup replay at Sunderland 48 minutes ago - AP Top News at 4:21 a.m. EST 49 minutes ago - United must improve on worrying stat with Casemiro out for three league matches 51 minutes ago - “Shouting” Sheffield United Star Billy Sharp Told: “You’re Better Than That” By Wrexham Boss Phil Parkinson 51 minutes ago - Biden warns US will act on China after balloon downing 54 minutes ago - ARIALAND (ARIA) Is Now Available for Trading on LBank Exchange 54 minutes ago - ‘First mover’ in a large unexplored vanadium district in Argentina 56 minutes ago - North Korean troops encouraged by Kim Jong Un, his daughter 57 minutes ago - 'Incredibly frustrating' visa delays could thwart another Montreal conference 1 hour ago - Wrexham skipper Ben Tozer hits back at Billy Sharp after Sheffield United’s FA Cup win 1 hour ago - ‘It’s Now or Never’: Rijksmuseum’s Hotly Anticipated Blockbuster Vermeer Show is Finally Here—And It Is Unmissable 1 hour ago - Russiagate reckoning wouldn’t be necessary if media didn't 'lie' in first place, Nunes memo author says 1 hour ago - Earthquakes in Turkey and Syria live updates: Death toll climbs past 9,000 as rescuers race against time 1 hour ago - 5 Everyday Serums Worth Investing In (Your Skin Can Thank Us Later) 1 hour ago - John Cleese Announces He's Writing A New Series Of Fawlty Towers After More Than 40 Years 1 hour ago - RTE Prime Time viewers praise 'brave' victim of abuse for speaking out amid Christian Brothers court controversy 1 hour ago - Ukrainian President Volodymyr Zelensky makes first visit to the UK since Russian invasion 1 hour ago - One Syrian's wait for news of trapped family 1 hour ago - Firefighters from Greater Manchester are flying to Turkey to help after devastating earthquakes 1 hour ago - ‘As special as it gets’: LeBron James solidifies legendary status by becoming the NBA’s all-time leading scorer 1 hour ago - Nuclear War, Global Annihilation: ChatGPT’s grim predictions on about the Russia-Ukraine war 1 hour ago - Anglican Church Set For Fiery Debate Over Same-Sex Marriage 1 hour ago - AP Top News at 3:53 a.m. EST 1 hour ago - Church of England considers alternatives to calling God ‘he’ 1 hour ago - Breaking the Mannerheim Line: Soviet Strategic And Tactical Adaptation in the Finnish-Soviet Winter War 1 hour ago - LeBron James breaks Kareem Abdul-Jabbar's all-time NBA scoring record 1 hour ago - Ukraine-Russia war latest: Zelensky en route to UK for surprise visit 1 hour ago - US Expert “President N’s ‘self-nuclear statement’ contains a message to China” 1 hour ago - Steph McGovern felt pressured to ‘poo on demand’ at Hugh Fearnley-Whittingstall’s house 1 hour ago - Viktor Orban: The West's Lone Anti-War Prophet 1 hour ago - LeBron James breaks NBA all-time points-scoring record - Omni sports - Sports 1 hour ago - IND vs AUS: “Sadly, Pitches Make More Noise Than Test Cricket” – Harbhajan Singh Ahead Of Border-Gavaskar Trophy 2023 1 hour ago - Legals for February, 8 2023 1 hour ago - Religion news 8 February 2023 1 hour ago - Arkansas Gov. Sanders Republican response to the State of the Union address 1 hour ago - Sheffield United striker happy to dump 'disrespectful' Wrexham out of FA Cup 1 hour ago - Erik ten Hag to keep faith with Man United strike duo Anthony Martial and Wout Weghorst 1 hour ago - LGBT+ History Month: Lauren Rowles, Stephen Fry, Nicola Adams, Jake Daniels and other stand-out episodes