'It’s not getting better': Unions call for action to ease overburdened health-care system 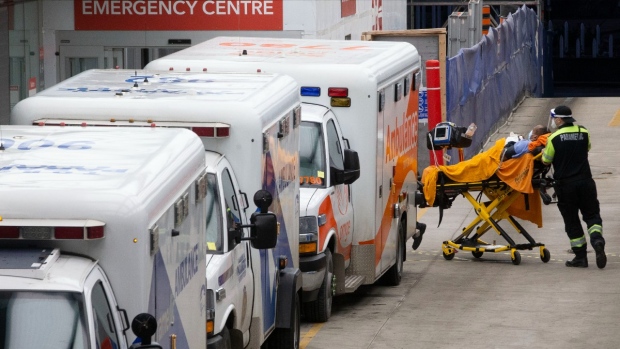 Leaders from five of Ontario’s largest health care unions are issuing an urgent appeal to the Doug Ford government, citing years of inaction and a lack of investment as factors in the province’s current hospital crisis. It's time to change course and take action with the solutions we all know will restore public hospitals,” Angela Preocanin, a registered nurse and vice president of the Ontario Nurses Association, told reporters. JP Hornick, president of Ontario Public Service Employees Union, said her members have had enough of chronic staffing shortages that have forced them to work longer hours with little support. “This government has followed in the footsteps of many previous governments and continued to underfund our public hospitals even through a global pandemic,” Hornick said. Months after the plan was announced, patients and front-line workers are still reporting long wait times and a lack of beds.
Continue reading...

Canada women to face Australia, Ireland and Nigeria at the 2023 FIFA World Cup

Neil Davidson, The Canadian PressWithin minutes of learning her team's path at the 2023 FIFA Women's World Cup, Canada coach Bev Priestman was looking deep into the draw. Ireland, ranked 24th, will be making its World Cup debut. The Super Falcons have never missed a World Cup and made the quarterfinals in 1999. The Philippines, Morocco, Vietnam and Zambia will also be making their Women's World Cup debut. Canada's best finish at the World Cup was fourth in 2003.

The Philadelphia Phillies, of all teams, are headed to the World Series. Against those back-for-more Houston Astros, y'all. After losing the World Series last year, Houston opened as a solid favorite to win the title this year, according to FanDuel. There was the thrilling 1980 NL Championship Series, when Mike Schmidt, Pete Rose, Steve Carlton and the Fightin' Phils outlasted Nolan Ryan at the Astrodome on the way to their first World Series title. Philadelphia eliminated defending World Series champ Atlanta in the NLDS and topped San Diego in the NLCS.

‘She had the biggest smile in the room’: Celebration of life ceremony held for Toronto Councillor Cynthia Lai

Late Toronto City Councillor Cynthia Lai was remembered for her ambition and dedication to the city at a celebration of life ceremony in North York today. “She had the biggest smile in the room and always shared her positivity with us,” Lai’s youngest son Darren said at the ceremony. Ontario Premier Doug Ford attended the ceremony, along with newly re-elected Toronto Mayor John Tory, who endorsed Lai for re-election. Her youngest son Darren said he learned invaluable life lessons from his mother’s actions. In honour of Lai, the City of Toronto lowered flags to half-mast at City Hall, Civic Centres and Metro Hall from Oct. 21 through today.

The troop movements come as the Ukrainian military said its forces have continued their counteroffensives in the Kherson and Zaporizhzhia regions. In a Telegram post Sunday, the Ukrainian military claimed to have destroyed 14 Iranian-made Russian drones over the past day. Roman Starovoit said Sunday that two defensive lines in the region already have been built and a third one will be finished by Nov. 5. Vyacheslav Gladkov said that defensive lines were also built in his region. Its facilities have been repeatedly targeted by Russian strikes during the war.

Toronto 's rookie had just made his NBA debut, and although it was 3 a.m. back home in Cameroon, his friends and family were still wide awake. “He's getting better every day, every time he steps on the court. He's gotta keep getting his legs under him, getting stronger, getting used to the NBA game and the pace and physicality. We're definitely gonna lean on him when he's out there.”Koloko appreciates the support from his veteran teammates. Been asking for a big,” VanVleet said during the team's traditional season-opening media day last month.

The Associated PressNEW YORK (AP) — Thomas Cahill, a scholar of ancient languages and belief systems with a knack for popular storytelling who engaged history readers with such bestsellers as “How the Irish Saved Civilization” and “Desire of the Everlasting Hills,” has died at age 82. Travis Loller, a family friend and Associated Press writer, says that Cahill died in his sleep Oct. 18 at his apartment in Manhattan. A native of New York City, Cahill attended Jesuit school in his early years and became a dedicated student of Latin and ancient Greek, along with the Bible, philosophy and classical literature. In “Mysteries of the Middle Ages," he countered popular beliefs that the Middle Ages was merely a time of superstition. “What academic writers forget is that everyone on Earth buys books for diversion, or entertainment,” he said in 2006.

Gregory Strong, The Canadian PressFelix Auger-Aliassime and Denis Shapovalov reached the final when they played in the Davis Cup together three years ago. Shapovalov and Auger-Aliassime helped Canada beat Spain in the final of the ATP Cup team event last January. Scheduling conflicts and injury concerns have sometimes prevented Canada from putting its A-team on the court at Davis Cup. Germany is ranked fifth in the Davis Cup team rankings, slightly ahead of No. Germany's last Davis Cup title came in 1993.