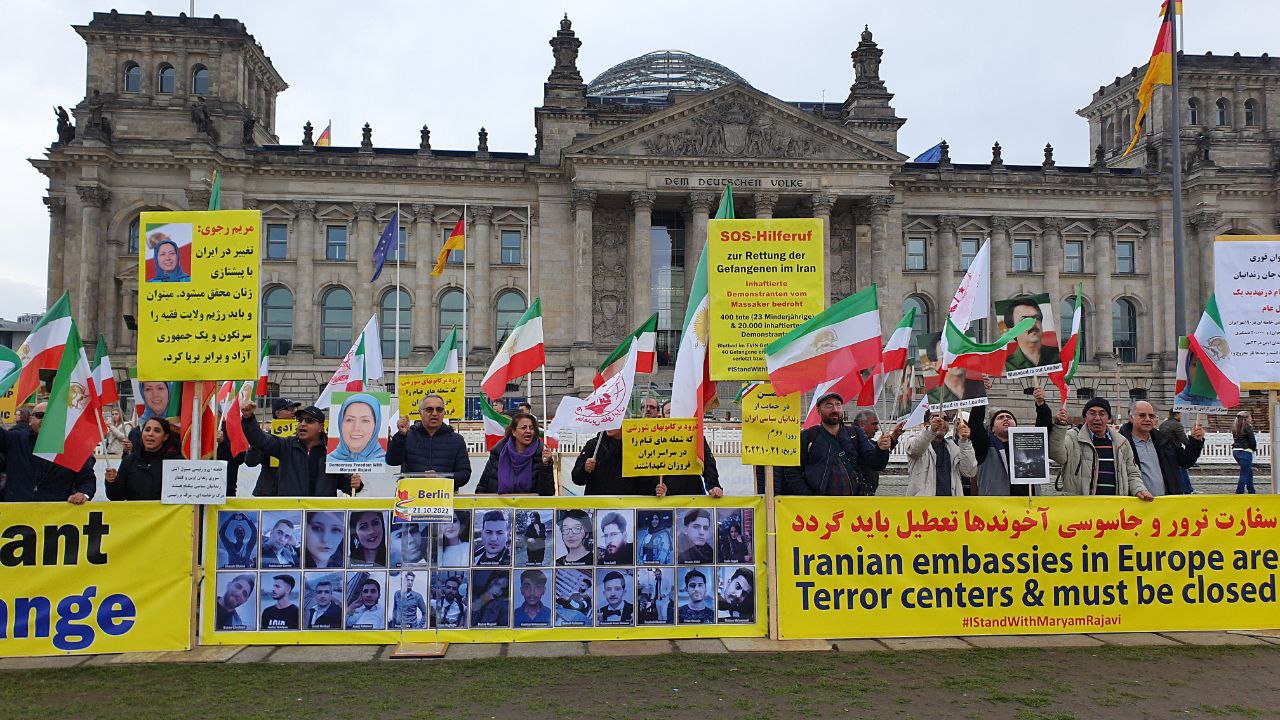 First, I would like to thank the honorable members of Congress for their support of the uprising and the Iranian people’s Resistance for freedom. Read moreMaryam Rajavi: The Message of Iran Uprising to the World and EU Leaders: Mullahs’ Era Has Come to an EndOn its 36th day, the magnificent Iran uprising continues to shake the pillars of Khamenei’s oppression, crimes, and injustice. Now, the people of Iran, the Iran uprising, and the Iranian Resistance are the ones who will have the final say. Recognize the Iranian people’s struggle to overthrow the regime! Read moreLondon and Toronto, October 20, 2022: Iranian Resistance Supporters Rallies in Support of the Iran ProtestsOctober 20, 2022: MEK Supporters Rallies in London and Toronto, in Support of the Iran Protests.
Continue reading...

Read On "National Council of Resistance of Iran"

More News On "National Council of Resistance of Iran"

Iran: On the Occasion of October 29, the Birthday of Cyrus the Great

Facebook Twitter LinkedIn Pinterest Reddit Email PrintCyrus was a great champion of freedom, justice, and human rights during one of the darkest periods of human history. At the height of slavery, Cyrus called for freedom of belief and religion. At the same time, Cyrus issued his famous declaration of human rights, which is preserved in its original cylinder of baked clay in the British Museum. I considered the needs of Babylon and all its places of worship and tried to improve their condition. For this reason, even though the people of Iran have long rejected the concept of monarchy, they respect him.

According to many observers, the major Iran protests had another turning point on October 26, as many cities witnessed anti-regime protests despite the previous days’ heavy crackdowns. At least 63 Iranian cities witnessed demonstrations and strikes, as well as protests by university students. These protests sent another shockwave across the globe, and Iranians’ bravery in facing a brutal regime left any spectator in awe. Besides, there has been an organized Resistance against the clerical regime, which through a well-spread and proactive network of activists, has constantly spread the message of “resistance” across Iran. Protests initially sparked due to the tragic death of Mahsa Amini in police custody and quickly featured slogans rejecting the entire ruling theocracy.

States should boost regions’ financial capacity to deal with crises

Having been asked by its 38 member countries to study the way in which regions coped with the financial consequences of the lockdowns imposed during the Covid‑19 pandemic, the OECD found that the regions best equipped to deal with economic crises were those with their own fiscal capacity and also clearly defined responsibilities. He advocated “flexible” responses to crises, as well as the establishment of stable fiscal policies that were better suited to combating tax avoidance and evasion. As a result, Madrid’s GDP was now back to 99% of its pre-Covid level and unemployment had fallen 25% in six months. Environment, education and ageing: regional finances must prepare for the futureMany regions are redirecting their budgets towards activities which they regard as priorities. According to Aida Jalilzade (Azerbaijan, ECR), the difficulties regions faced were not the result of economic or political factors alone but also of institutional factors.

1 month ago Council of Europe

European Union leaders are expected to focus on China and Iran’s military involvement in Ukraine in today’s discussion of ‘external’ relations. After Josep Borrell Monday said the EU needed evidence before acting, a closed-door United Nations Security Council (UNSC) meeting Wednesday reviewed available information. The EU and the United Kingdom Thursday sanctioned three Iranian military commanders and a defense company over allegedly supplying drones to Russia. October 6, 2022‘All means…to confront’US officials argued Thursday not just that Iran had sent military personnel to train Russia in using Iranian-made drones. Kirby said the US would use “all means” to “confront Iran’s provision of these munitions against the Ukrainian people.”“We assess that Iranian personnel, Iranian military personnel, were on the ground in Crimea and assisted Russia in these operations,” Price said at a separate media briefing.

US Special Envoy for Iran, Rob Malley told Iran International Monday that a tweet he sent on Iran protests, which led to negative reactions, “was poorly worded.”“It is not up to me; it is not up to the US government what the brave women and men who have been demonstrating in Iran want. It is up to them,” Malley told our correspondent Samira Gharaei. More US sanctions will further reduce the chances for a deal, as Tehran has already demanded older non-nuclear sanctions to be removed as a pre-condition. Already, both US and European countries have announced sanctions related to the drone issue. Malley also reiterated that the “JCPOA is not on the agenda right now” and the US is focused on the brutal crackdown by the Iranian regime on its people and its supply of drones to Russia that are used against civilians.