3 storylines heading into The American Express final round 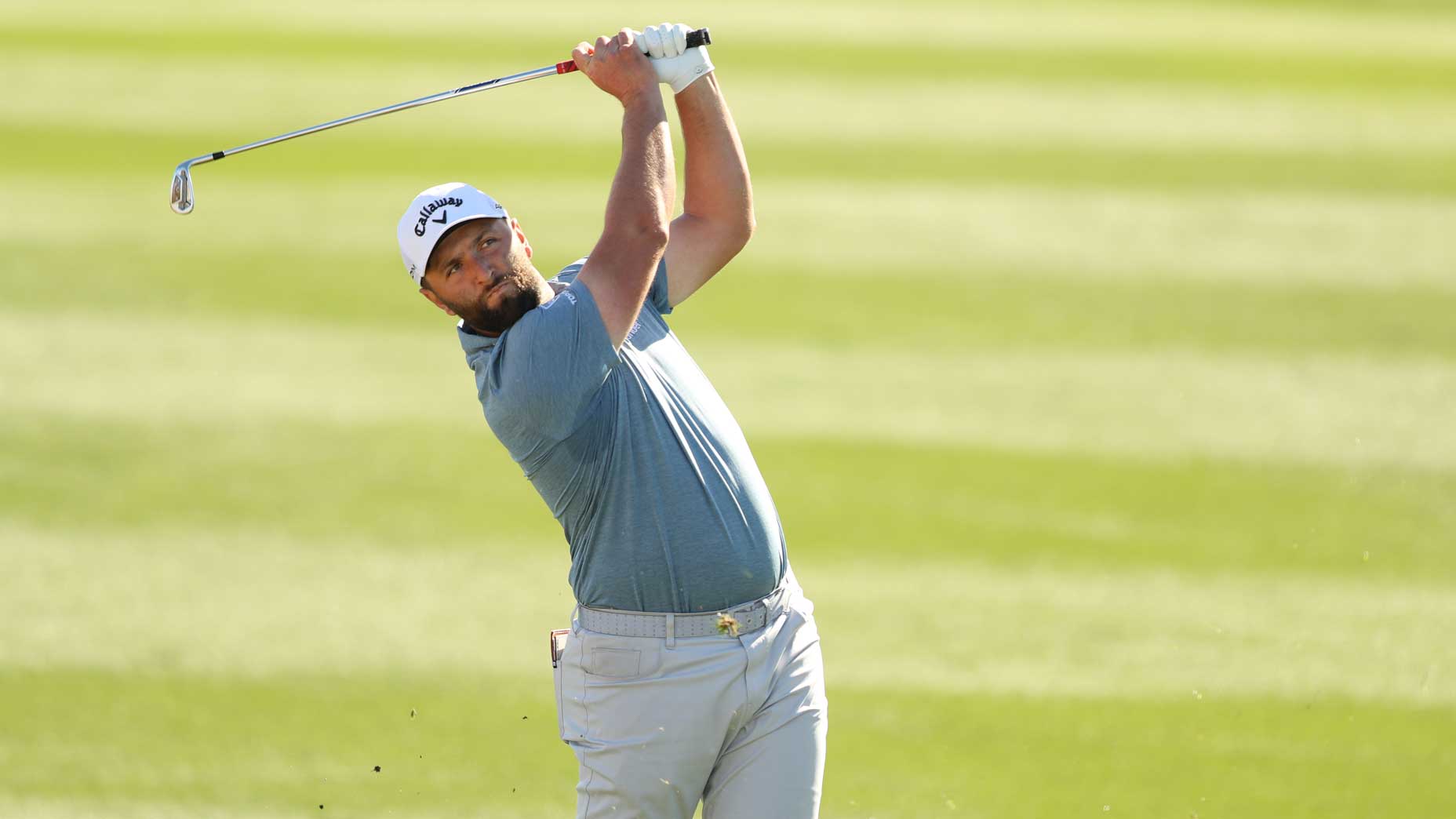 3 storylines heading into The American Express final roundShare on FacebookShare on TwitterShare by EmailJon Rahm is in the midst of a worldwide heater. Jon Rahm and Davis Thompson will begin the final round tied at 23 under and four shots clear of the rest of the field. Here are three storylines we’re watching heading into the fourth and final round:Jon Rahm’s run of dominanceThrough 12 holes, Rahm appeared to be running away with the tournament. Despite the less than stellar finish, he still enters the final round with a great chance for his second-straight win and his second win at The American Express. “So [I’m] very confident going into tomorrow and knowing that I’m going to have to shoot another low score if I want to have a chance to win,” Rahm said after the round.
Continue reading...

And if you thought 2022 was wild, think on this: 2023 stands to be wilder still. Major confrontationsIn 2022, the PGA Tour-LIV battle was waged largely at a distance through verbal volleys, sanctions and legal filings. LIV Golf applied for OWGR recognition last summer. It wants world-ranking points. It needs world-ranking points.

Netflix releases trailer, details for much anticipated PGA Tour docuseriesShare on FacebookShare on TwitterShare by EmailIan Poulter is one of several now-LIV Golf pros will we appear in the docuseries. “You picked a hell of a year to start following the PGA Tour,” Ian Poulter says in a clip from the trailer. McIlroy was not initially among the 22 players who Netflix confirmed would be a part of the series last January. Other players, Tour players and now-LIV Golfers, who initially signed on last year include Abraham Ancer, Daniel Berger, Cameron Champ, Rickie Fowler, Sergio Garcia, Harry Higgs, Max Homa, Viktor Hovland, Kevin Na, Xander Schauffele and Bubba Watson. According to the PGA Tour, the series covers the “entirety of the competitive calendar” and the USGA, R&A, PGA of America and Augusta National all took part in the series.

Inside Jon Rahm’s ‘crazy day’ — and Collin Morikawa’s epic collapseShare on FacebookShare on TwitterShare by EmailJon Rahm emerged the winner thanks to a sparkling 63 — and some help from Collin Morikawa. “It’s okay, I’m over it.”“Hero” referred to the 2021 Hero World Challenge, where he’d needed a win to get to World No. Early in the week, Jon Rahm was asked if the Sentry Tournament of Champions owed him one. Last year, after all, he shot 33 under par and lost to Cameron Smith’s PGA Tour-record 34 under. But where Rahm had found the putting surface, Morikawa’s approach trickled off the right side and down the steep greenside slope.

A forensic breakdown of the Rory McIlroy vs. Patrick Reed incident

A forensic breakdown of the Rory McIlroy vs. Patrick Reed incidentShare on FacebookShare on TwitterShare by EmailWhat happened with Rory McIlroy and Patrick Reed? GolfTipsChecker/TwitterOn Tuesday, a curious news story broke that Patrick Reed had “flicked a tee” in Rory McIlroy’s direction in the practice area at the Dubai Desert Classic. Apparent footage of the Rory Reed tee 'throwing' incident. So…did Reed toss a tee at Rory? I’d boil it down to what we can actually see: Patrick Reed went up to greet Rory McIlroy on the driving range while McIlroy was working with his coach Michael Bannon and his caddie Harry Diamond.

How to watch the 2022 Bermuda Championship on Friday: Round 2 live coverage

How to watch the 2022 CJ Cup on Friday: Round 2 live coverage

19 minutes ago - Sterling Could Fall Further as BOE May Have Reached Peak Rates 20 minutes ago - Exxon’s profits leave BP and Shell in the shade 20 minutes ago - Dani Alves Pleads With Wife Joana Sanz After She Files For Divorce 23 minutes ago - New Apple HomePod UK release date, price and how to buy today 25 minutes ago - Eddie upbeat for ‘intriguing’ World Cup 34 minutes ago - Jones family State of the Union: Packers offense comes to Dallas committed to Dak & Zeke 40 minutes ago - Playtime is purr-fect for your cat’s welfare 41 minutes ago - OKX becomes Name Sponsor of Istanbul Fintech Week 42 minutes ago - Great West Life Assurance Co. Can Purchases Shares of 8,323 Armstrong World Industries, Inc. (NYSE:AWI) 42 minutes ago - How a Tom Brady-loving grandma inspired the making of ‘80 for Brady’ 42 minutes ago - FIA sets £264k bill for new F1 entries as criteria Andretti must meet made public 44 minutes ago - Connor Flowers Cause of Death: Olivia Flowers’s Brother, Died at the Age of 32 47 minutes ago - World Cup winner Raphael Varane retires from France team 54 minutes ago - Talking points ahead of Ireland's Six Nations opener with Wales in Cardiff 57 minutes ago - New talent and industry veterans mix at Vanity Fair EE Rising Star Party 58 minutes ago - 10 observations about Virginia’s new population estimates 59 minutes ago - Dublin band Wild Youth in running to represent Ireland at Eurovision 2023 1 hour ago - AlphaTauri confirm driver line-up for two-day Pirelli test at Paul Ricard 1 hour ago - 'I get the same vile pictures and threats as Emily Atack, hundreds every day' 1 hour ago - Solway Sharks juniors selected for world's most prestigious minor hockey tournament 1 hour ago - Tennis star Kyrgios to contest Australian assault charge 1 hour ago - Mercedes tech chief not 'a huge fan' of 2022 F1 regulations, claims they have not led to closer racing 1 hour ago - Tennis Star Nick Kyrgios Admits Assaulting Ex-Girlfriend But Avoids Conviction 1 hour ago - Blues Brothers 2000: Goofy sequel to cult hit gave viewers the blues 1 hour ago - Cork's John Lydon says he's singing from the heart on Late Late Show Eurosong special tonight 1 hour ago - BBC documentary row: SC issues notice to Centre, seeks report within 3 weeks 1 hour ago - Ashley Roberts and Emily Atack lead the glamorous departures from BAFTAs Vanity Fair party 1 hour ago - Sonos Move review: a Bluetooth smart speaker with Alexa Built-in 1 hour ago - Six Nations Fantasy: Six premium players who are worth the price tag 1 hour ago - Eurovision 2023: John Lydon 'shaking' as he makes bid for Ireland 1 hour ago - Breitling launches dynamic, limited-edition watch range dedicated to Six Nations Rugby 1 hour ago - Virtual Reality in Tourism Market is expected to witness impressive growth between 2023 and 2028 | Including 108 Pages Report 1 hour ago - Air Bed Market Is Expected to Increase with Positive Growth Rate, Owing to the Adoption of the Modern Advertising Technology 1 hour ago - Nick Kyrgios admits assaulting girlfriend: ‘I’m sincerely sorry’ 1 hour ago - Sons share update with new picture of Sarah Beeny ahead of her cancer surgery 2 hours ago - Festival mood hits Joburg – welcome to The Championships 2 hours ago - What is a suspected Chinese spy balloon doing above the US? 2 hours ago - F1 team boss claims Mohammed ben Sulayem 'has to go' as pressure mounts on FIA 2 hours ago - What Are Dividend Contenders? Investing in Dividend Contenders 2 hours ago - Ryan Tubridy Skipped Toy Show The Musical 2 hours ago - Global PC Films Market Upcoming Trends and Business Opportunities 2023-2030 2 hours ago - ‘Why, why, why?’ – 9 famous songs that were banned 2 hours ago - When Lewis Hamilton responded to having Max Verstappen as a potential teammate: "If there is a chance..." 2 hours ago - SC issues notice to Centre on pleas against blocking of BBC documentary 2 hours ago - As dancers leap, ballet members hope hearts flutter for Ukraine 2 hours ago - Blinken gave Netanyahu a ladder for his gov't, will he take it? 2 hours ago - Tech giants fall – Daily Business 2 hours ago - Why I remain bullish on the Shell share price 2 hours ago - Chinese spy balloon flying over US airspace, says Pentagon 2 hours ago - Global Recommendation Engine Market Comprehensive Research Report 2023 | Latest Trends, Key Players, Opportunities, Risks Factors Analysis and Forecast to 2029 2 hours ago - Shorter season having no impact as GAA back on commercial track 2 hours ago - Time to talk terms: key Arsenal trio among 20 best players out of contract in 2024… 2 hours ago - Massive ‘Stonehenge of the North’ opens to the public 2 hours ago - China's crackdown cost Apple $6 billion in iPhone sales last quarter 2 hours ago - Today's rugby news as Wales players 'on edge' around Warren Gatland and world star quits overnight 2 hours ago - Red Bull set to announce Ford power unit partnership after media leak 2 hours ago - Rita Ora flashes giant engagement ring for the first time in public 2 hours ago - The media blackout over Qatargate 2 hours ago - Federal Govt Saves N45.7bn From Digitalisation Of IT Project Clearance – Buhari 2 hours ago - Why the Church is Israel’s best friend against Iran